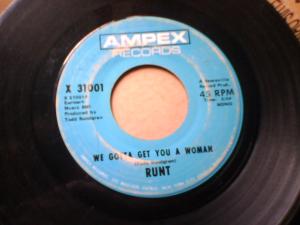 Todd Rundgren, is there anything he can’t do? I trust you can read the man’s wikipedia page, but I will give you some highlights.

After a top 40 hit with “We gotta get you a woman” he went on to become a prog rock stage spectacle, bought Eric Clapton’s guitar, scored 4 episodes of Pee-Wee’s playhouse, recorded 21 records, developed one of the first computer paint programs, and produced records for XTC, New York Dolls, Bad Religion and like a million other bands. Todd and I share the same birthday, June 22.

This particular track was recorded under the name “Runt” a psyedonem Todd used for only two records before he stopped pretending that he wasn’t playing all the instruments himself.

This is a pretty straight forward pop-ballad.  Its almost got kind of a yacht rock/allman bros thing going on. I dig it. Let me know what you think.

(Lucky you! This track is still “in print” on various comps and as a remastered digital download. The track I am providing is ripped from vinyl and is here for you as a preview copy. Don”t be a jerk, if you like it buy it!)

This entry was posted in Uncategorized. Bookmark the permalink.