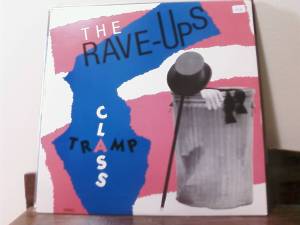 So, lets just get this out of the way. I am not a huge John Hughes fan. Sue me, I have a cold dead heart. When I scored this record at the Lawrence Public Library sale today for a dime, it was because I had a hunch that it might be some passable early 80’s pop.  I didn’t notice that Beth Ringwald is thanked in the liner notes. And I certainly didn’t know that this was the band that played the club scene in Sixteen Candles.

So, it turns out that Beth Ringwald is Molly Ringwald’s older sister. And the reason the Rave-Ups, an otherwise unknown L.A. pop-band, managed to audition personally for Mr. Hughes and appear in the film? Another classic case of sibling taste-making. Molly might have been the movie star, but Beth was still the older sister, and she was into the Rave-Ups. (So into them that she had a son, Chance, with lead singe Jimmer Podrasky in 1990.)

This is the Rave-Ups first album, a six song EP, guitar driven and hook laden the way pop was meant to be. Sounds like goofy REM or maybe a less spastic DBs. Its innocent, and funny and kind of sweet. In short, it sounds like a John Hughes flick. Enjoy.

This entry was posted in Uncategorized. Bookmark the permalink.